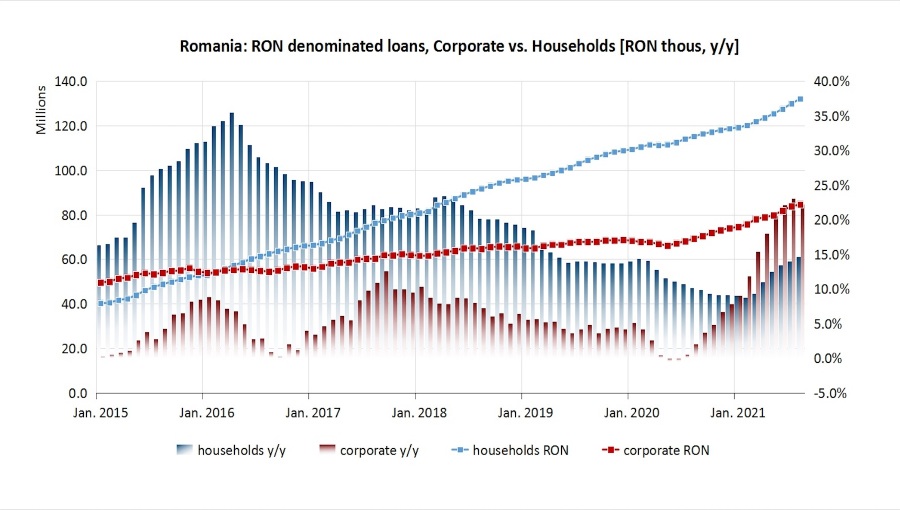 Of this total, more than two-thirds (RON 220 billion) were loans denominated in local currency, which increased 17.5% year-on-year.

Business loans have gained momentum thanks to the COVID-19 support program over the past year, but as subsidies are phased out and economic activity returns to normal, retail lending (consumer, mortgage) are gradually coming back as the driving force behind the overall growth of bank lending.

Before the crisis, personal credit was by far the main driver of bank lending. Even now, in August, the stock of personal loans (RON 132.0 billion) was 38% larger than the stock of business loans (RON 88.9 billion).

However, sooner or later the market will return to the pre-crisis pattern: corporate loans have grown at comparatively slower rates in recent months: + 0.8% m / m in August, compared to + 1.6% m / m for loans to individuals. .

This is not yet a trend, as until August, business loans continued to grow at higher monthly rates. But credit to individuals is visibly gaining ground (by + 9% yoy in January) and is finding annual growth rates closer to those shown by credit to businesses, which still benefits from the support of the State.

Personal credit is gradually returning to robust growth in Romania