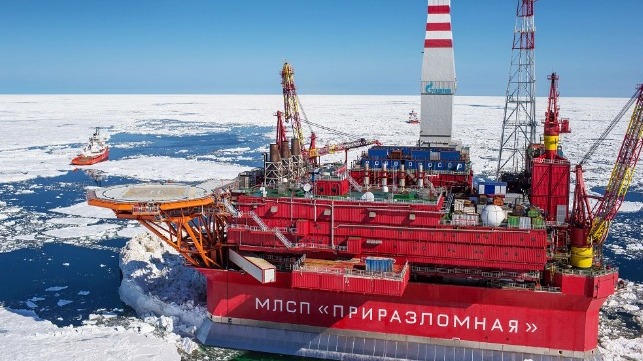 The US Treasury has reached a settlement agreement with drilling equipment maker Cameron International over apparent violations of US sanctions against the Russian Arctic offshore oil industry.

Following Russia’s 2014 invasion and occupation of Ukrainian Crimea, the Obama administration imposed severe sanctions on certain sectors of the Russian energy economy. The measures prohibit US nationals from selling goods, services or technology for use in Russian deepwater, arctic offshore or shale projects. This quickly shut down Russian oil companies’ access to American drilling technology and forced the cancellation of at least one major joint venture, an Exxon-Rosneft partnership for exploration in the Kara Sea.

According to the Treasury’s Office of Foreign Assets Control, a Houston-based oilfield supply company has not complied with these restrictions. In 2015-16, a Romanian subsidiary of Cameron International Corporation entered into an agreement with Russian oil company Gazprom-Neft for the supply of goods for the Prirazlomnaya offshore oil platform. Prirazlomnaya is the only operational offshore production project on the Russian Arctic continental shelf, which makes it particularly vulnerable to US sanctions.

At the end of July 2015, Cameron Romania staff contacted executives at the company’s Houston office to request approval of contracts with Gazprom-Neft Shelf, the operator of Prirazlomnaya. The approval process required the Romanian subsidiary to obtain approval from the head office for contracts above a certain value threshold. In response, Cameron’s senior executives – who were US nationals, not foreign employees – approved the contracts. They also approved two pre-purchase forms for a contract, allowing Cameron Romania to start work before the final execution of the contract.

At the time of the approvals, according to OFAC, Cameron executives in Houston had reason to know that the services they were providing were in support of offshore oil production projects in the Arctic. Cameron Romania’s requests included references to Gazprom-Neft Shelf’s Prirazlomnaya platform and made it clear that the Russian Arctic was the destination of the goods, OFAC said.

Cameron International had compliance policies in place to ensure it complied with sanctions measures, including a form for transactions involving Russia. However, that form did not indicate that there could be a risk of sanctions if US officials in Houston approved the activities of Cameron’s foreign affiliates, such as Cameron Romania.

In total, four senior U.S. Cameron executives – a division president, two vice presidents of finance and a senior executive – approved the contracts and pre-purchase forms. Schlumberger acquired Cameron in April 2016, after two of the contracts were approved, and three more were approved after the acquisition. Schlumberger later discovered the apparent violation and reported it to OFAC. “OFAC, however, considered Cameron’s comments not to constitute voluntary self-disclosure,” the office said in a statement.

In total, Cameron Romania made 111 shipments of E&P equipment to Gazprom-Neft Shelf for use at Prirazlomnaya, helping the facility achieve its current production of around seven million barrels of oil per year.

The maximum possible penalty for violating the sanctions was around $ 22 million. After assessing the seriousness of the offense, OFAC decided to settle with Schlumberger for $ 1,400,000, the minimum amount of the civil penalty.

Help us pursue the fugitives