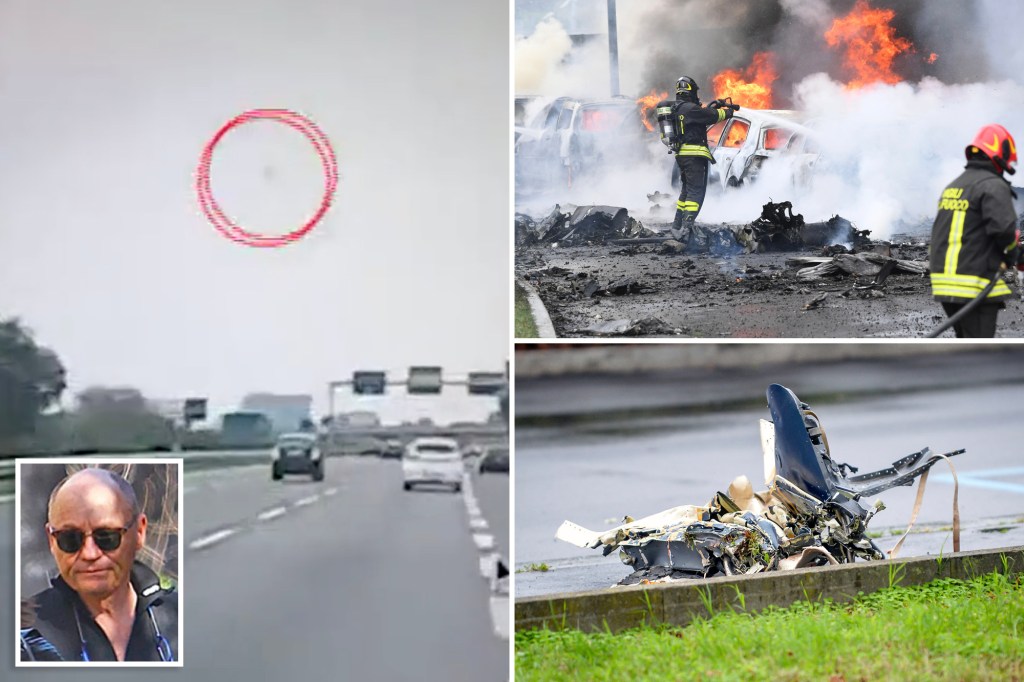 Dramatic dashcam video captured the moment a plane piloted by a Romanian billionaire crashed into a building in Italy, killing the 68-year-old man, his wife, son and four others.

Dan Petrescu was piloting the single-engine Pilatus PC-12 which was captured on Sunday collapsing in flames at an office building in San Donato Milanese, a town southeast of Milan, authorities said.

Among the dead was a toddler who had been baptized earlier today, The Sun reported.

Video posted by romaniatv.net captured from a vehicle traveling on a highway shows the plane descending in an almost vertical dive before a fireball erupts at the scene of the impact with the building, which was under renovation.

Raphael, who was born in January 2020, is said to have had his baptism earlier on Sunday.

Nascimbene, born in Italy, and his wife, a French citizen of Romanian origin, were both business leaders and friends of the Petrescus, the Sun reported.

The fatal wreckage took place minutes after the plane took off from Milan Linate airport at around 1 p.m., according to the ANSV aviation agency, which opened an investigation.

Petrescu, who ran a large construction company and owned a series of big box stores and malls, was on his way from Milan Linate Airport to the island of Sardinia when he encountered problems, reported the Washington Post.

“Why did you deviate? To avoid turbulence? an air traffic controller asked him, according to the newspaper, which quotes an article from Corriere della Sera.

“No” was the only answer.

The black box has been recovered and the investigation is continuing.